A shapeshifting boar demon was beheaded in Depok, West Java after it stole money and valuables over the past month.

At least, that’s what the residents of Badahan village in Sawangan sub-district believe, but their story about a babi ngepet terrorizing their village has become national news in a country with deep supernatural traditions as Indonesia.

In Indonesian lore, a babi ngepet is a person who uses a black magic-infused cloak to transform into a wild boar. In boar form, they would sneak into people’s homes and rub their bodies on the walls and furniture, which would magically draw the household’s money and valuables. When the babi ngepet shifts back to human form, the stolen fortune is contained in the cloak.

The villagers of Badahan were certain that only a babi ngepet could’ve been responsible for their money going missing over the past month. On Monday, 12 men of the village went butt-naked — because they believe that’s the only way they could see the demon with their own eyes, for some reason — and found the babi ngepet, which they captured and caged.

While the villagers initially wanted their fortune back, they said they saw the beast gradually shrinking. So they decided to kill it before it could vanish.

In a video that has gone viral, a respected figure at the village is seen calling on the babi ngepet’s family to come forward before the villagers execute it.

Nobody came forward, so the villagers beheaded the boar yesterday and buried the body parts separately so they don’t somehow magically fuse back together. Nobody has come forward to report any of their family members missing, presumably from their tragic babi ngepet adventures, either.

Now, we hope we don’t have to tell you that this story was entirely based on the claims of the villagers, and that nobody besides them actually saw the so-called babi ngepet. Nevertheless, the local police got involved and said that the boar they saw was just a regular swine.

“We were worried that the whole thing attracted crowds, so we dispersed them as we are still in the COVID-19 pandemic,” Sawangan Police Chief Rio Mikael Tobing said.

Yet the story still broke nationwide to the point that the Indonesian Institute of Sciences (LIPI) had to come forward and say that there is no such thing as a babi ngepet.

It’s possible that the babi ngepet was made a scapegoat (or scapeboar, as it were) by the villagers who have been hit hard economically by the pandemic. If that were the case, who are we to deny them this temporary distraction from their circumstances? 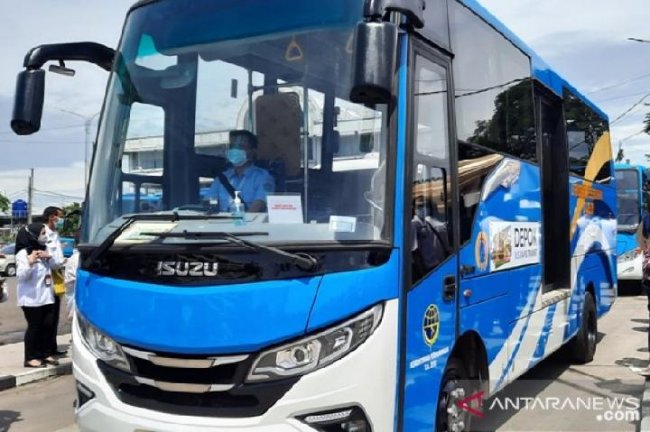 TEMPO.CO, Jakarta - Depok Transportation Department in West Java invited the people to use bus as their daily transportation to reduce traffic density.

"We have Depok Go Lancar bus or D'Gol that serves one route, which is the Jati Jajar Terminal - Margonda Depok Terminal," said the city transportation department chief, Dadang Wihana in Depok, Friday, April 2.

Dadang said that D'Gol has started its operation since March 29, 2021. The bus serves the public to wander around the city's Margonda Raya area which covers Depok City Hall, Dmall, Detos, Margo City, Pesona Square, and Ramayana.

"The fare per trip is Rp7,000. People can travel to Depok shopping center without using private vehicles," he said, claiming that it will only take less than 30 minutes. TEMPO.CO, Depok - Depok City Transportation Agency Head Dadang Wihana announced that the operation of intercity and interprovincial (AKAP) buses and intercity intra-provincial (AKDP) buses in Jatijajar Terminal will be suspended from May 6 to 17, 2021.

"This is decided during a meeting of Greater Jakarta Transportation Management Agency (BPJT) as a follow-up to the central government's ban on Eid homecoming," said Dadang in Depok, Thursday, April 1, 2021.

He appealed to the public not to leave the city or return to their hometown before and after the ban period given that the Covid-19 pandemic is not yet contained to date.

"The policy is exempted for people who are in an urgent situation. AKAP and AKDP bus service will still be provided in Pulo Gebang Terminal," Dadang said.

The regional agency, he went on, is still waiting for the technical regulation on the homecoming ban from the central government, including the policy on checkpoints.

"I hope Depok residents can understand this condition because this is for the common good in controlling the transmission of Covid-19," he said.

Depok Deputy Mayor Imam Budi Hartono also called on the public, especially Depok residents, to comply with the central government’s regulations on the Eid homecoming ban from May 6 to 17, 2021.