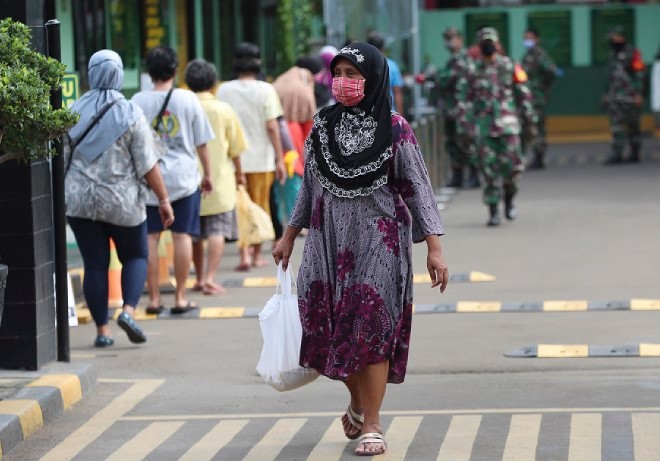 DEPOK, Indonesia--The global pandemic has left millions of Indonesians struggling to make ends meet. Now the authorities are rolling out “rice ATMs” in a bid to ensure greater access for those in need to the essential Asian staple.

This month Linda Syafri, a 28-year-old expectant mother was among the many who lined up in masks at a military base in Depok, on the outskirts of the capital Jakarta, for their 1.5-kilogram rice ration.

“I was laid off by my company last week and my husband was laid off too without severance pay,” said Syafri. “Although it (the rice subsidy) is not that much, it is very helpful in this situation.”

The rice dispensary, one of 10 in and around Jakarta, is part of a government initiative to assist those worst affected by the coronavirus outbreak, which has caused millions to lose their jobs in Southeast Asia’s largest economy.

Stacked with kilos of good-quality rice and operated by magnetic cards, the tall automated teller machines look much like normal cashpoints, only that they pump out grain instead of banknotes.

“Each day we prepare 1.5 tons (of rice) for around 1,000 residents,” said Ibrahim, an army official supervising distribution who uses one name like many Indonesians. “We will continue doing it every day, without rest, even on weekends, we will distribute non-stop.”

Indonesia announced a $25 billion (2.6 trillion yen) stimulus package in March in response to the COVID-19 outbreak, pledging to provide social welfare for up to 10 million households, including food assistance and electricity tariff discounts.

In the sprawling developing nation where millions work in the informal sector, Finance Minister Sri Mulyani Indrawati told parliament last week the coronavirus had set efforts to eradicate poverty back a decade.

Residents eligible for the rice ration include daily wage earners, the unemployed, those who do not own a house and people who live below the poverty line.

More than 14,000 Indonesians have contracted the coronavirus since early March, with 991 killed by the disease, the highest death toll in East Asia outside China.

Despite a lack of evidence the government has flattened the COVID-19 curve, or slowed the rate of new infections, the administration of President Joko Widodo is eager to resume economic activity and ease social restrictions--a move critics have described as premature.