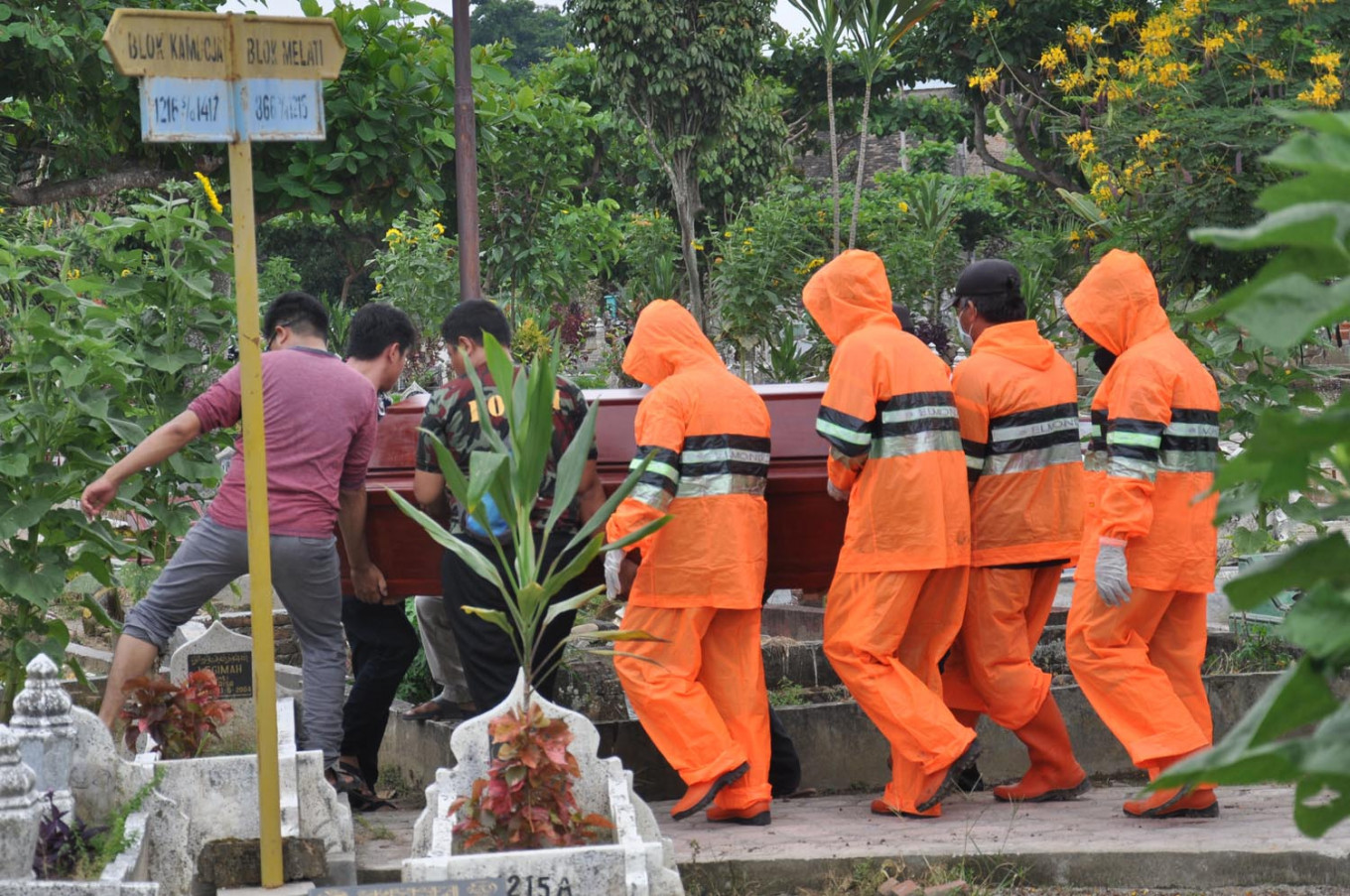 Some nearby residents oppose the burial of a person with COVID-19 at the Bedahan Public Cemetery in Sawangan district in Depok, West Java claiming that the Depok administration had not been transparent over the condition of the deceased.

The head of Depok's Communication and Information Agency, Sidik Mulyono, went to the cemetery on Monday with the Health Agency head Novarita to mediate between the nearby residents and the administration.

The residents expressed complaints about a lack of communication related to the decision to bury a COVID-19 patient in the cemetery.

"The residents wish there had been an announcement at the neighborhood unit [RT] level. The RT head should have told them that there would be a funeral for a person with COVID-19 and they did not have to worry. This was what they were asking [about]: their safety," Sidik told The Jakarta Post in a telephone interview on Tuesday.

In compliance with safety protocols, the hospital that treated the patient had sprayed a disinfectant on the corpse, washed it, covered it in plastic and put it inside a coffin.

The fast-spreading respiratory disease has so far infected 30 people in Depok. As a satellite city of Jakarta, the national epicenter of the outbreak, Depok's number of confirmed cases was the highest in West Java.

The residents' opposition also related to the administration's decision to bury a COVID-19 patient from Cimanggis district, also in Depok, at the Bedahan cemetery. Sidik said the administration chose to bury the patient at this cemetery because of the "emergency situation", although there was an available cemetery in the district where the dead person used to live.

The administration said it previously faced similar opposition from locals near other public cemeteries, but Sidik refused to name the places.

Similar tensions between a city councilor and the local police chief over a funeral of a patient under close observation took place in Medan, North Sumatra on Monday.

A member of the Medan Legislative Council, Edi Saputera, refused to comply with Medan Police chief Adj. Comr. Faidir Chan's order to immediately bury the patient, who was the councilor’s relative, in line with the protocol for the funerals of persons with COVID-19.

Edi reportedly insisted having a normal funeral ceremony, laying out the corpse in the home of another family member and allowing relatives view the deceased for a last time.

The patient had been treated at the Madani General Hospital in Medan and was tested for the COVID-19 coronavirus, but the results had not been announced by the funeral, said Edi.

"You [the police] are overreacting. Do not be like that. I am myself not afraid of death. What is wrong with death?" Edi, a National Awakening Party (PAN) politician told the police, as shown in a video circulating on the internet.

"Let me swallow the coronavirus."

The North Sumatra administration had declared a state of emergency on Tuesday that would last through to May 29 following growing cases in the province. North Sumatra has been the hardest-hit province on Sumatra Island with 13 confirmed cases and one death. (dfr)

Apriadi Gunawan from Medan contributed to this story


If you want to help in the fight against COVID-19, we have compiled an up-to-date list of community initiatives designed to aid medical workers and low-income people in this article. Link: [UPDATED] Anti-COVID-19 initiatives: Helping Indonesia fight the outbreak