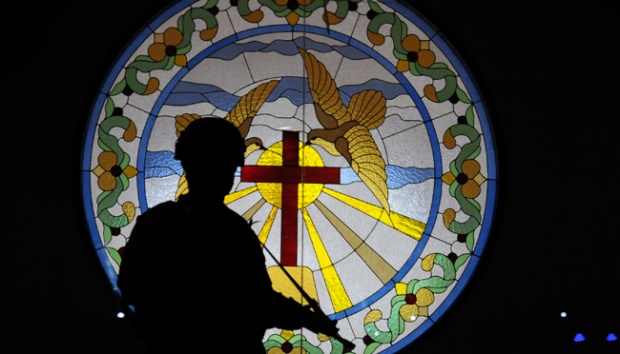 TEMPO.CO, Depok - The Depok city police confirmed that a gray backpack, found near the entrance of the Bethel Indonesia Church (GBI) at Kartini Street in Depok city, West Java Province, did not contain any explosive material. The Gegana bomb-disposal squad personnel discovered several books and clippings in the backpack after they had checked it thoroughly, Depok Police Chief Adjunct Sen. Coms Azis Adriansyah told journalists inside the church's yard Tuesday.

"We received a report from a church worker about a suspicious bag found in front of the church gate. But, we wanted to ensure that there was nothing harmful inside."

"So, our brothers and sisters who are keen to join the Christmas Eve service at the church can take part peacefully," Adriansyah said.

During the Gegana bomb-disposal squad's investigation, Kartini Street was temporarily closed but it was reopened later to avoid traffic congestion.

The church's front yard and its multi-function hall was packed with the congregation who came from various parts of Jayapura, the capital of Papua Province, for the Christmas Eve service.

Christians in Biak Numfor District, Papua Province, also attended the Christmas Eve services highlighting the theme of "giving up life for all people."

Workers at Christian churches, such as the GKI Maranatha Biak, Santa Maria, Immanuel Agung Samofa, IS Kijne, and Bethel Indonesia, had made all requisite preparations for the religious events since Tuesday morning.

Fifty-nine congregations of the Biak Selatan Indonesian Christian Churches will be part of the Christmas Eve services, Chairman of the Evangelical Christian Church Workers for South Biak George Korwa confirmed.

"We hope the entire Christmas Eve service process would be held in a tranquil and peaceful environment," Korwa stated, adding that the theme of this year's Christmas celebrations projects the messages of friendship as revealed in Bible's Yohannes Verses.

The messages of friendship are expected to restore the history of togetherness among Indonesians in fighting for humanity and Indonesia's dignity.

In the run-up to the Christmas celebrations Wednesday, the situation in Biak City remains secure and peaceful. Residents are engaged in their routine activities, while shops and markets are open. The city's airport and seaport are also operating normally.

Throughout Indonesia, the police is ready to secure this year's Christmas and New Year's Eve celebrations, according to Coordinating Minister for Political, Legal, and Security Affairs Mahfud MD.

"Our police has been ready, and Insya Allah (God's willing), our people can celebrate Christmas and New Year in a tranquil and peaceful environment," he informed journalists after meeting with National Police Chief General Idham Azis in Jakarta recently.