Just beyond the wrought-iron gates of the Westfries Museum is a big poster bearing the headshot of an Indonesian woman with the word “Depok” above it.

Batavia is indeed headlining at the museum, commemorating 400 years since Hoorn-native Jan Pieterszoon Coen – whose statue stands at the center of a square by the museum – conquered the port town of Jayakarta and renamed it Batavia in May 1619.

“Coen actually wanted to name the city ‘Nieuw Hoorn’, after his hometown. But the Dutch East India Company (Vereenigde Oostindische Compagnie: VOC) board in the Netherlands wouldn’t hear of it, and it became ‘Batavia’,” said Westfries Museum director Ad Geerdink.

VOC was a Dutch trading company that managed the country’s international commerce in Asia. It evolved into what became the Dutch colonial administration in the Indonesian archipelago.

Westfries’ expositions this year were all related to colonial Indonesia: one on Dutch-East Indies art earlier this year, followed by “Depok, the Dream of Cornelis Chastelein”, about the little-known history of a unique community formed south of Jakarta three centuries ago. 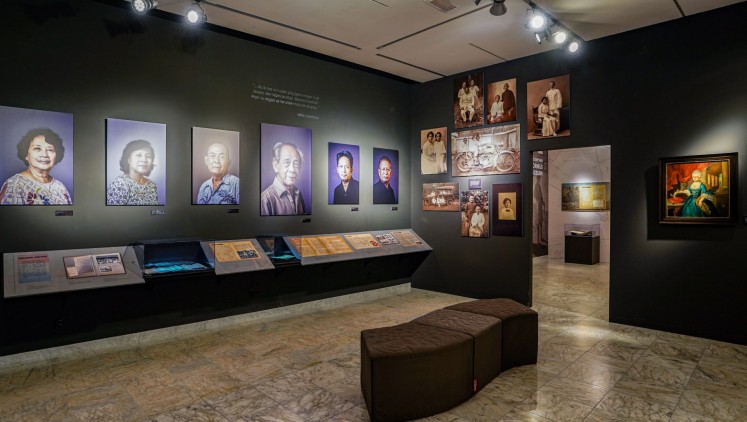 Into the past: The exhibition Depok shows the little-known history of a unique community formed south of Jakarta three centuries ago. (Courtesy of the Westfries Museum/-)

But the jewel in the crown is its virtual reality journey of Batavia in 1627, where visitors can get a bird eye’s view of the city when it was under the control of Coen.

In 1918, a Hoorn town hall employee found a dusty package in the building’s attic, which turned out to be a folded original map of Batavia in 1627. The large map was created by cartographer Floris van Berckenrode and is the oldest detailed map of the city.

While heavily damaged, it still clearly shows its harbor and fort, the Ciliwung River whose waters flowed into the symmetrical canals the Dutch created in the city, with buildings standing alongside them. The map now hangs in the museum, left in its badly damaged condition that underscores its authenticity.

“What did the city look like? What was it like to live there? Those were the questions we had in mind when we started working on the virtual reality project in 2017,” Geerdink said.

This resulted in a remarkable vehicle that takes visitors on a journey through the Batavia of four centuries ago, which only numbered some 2,000 residents. Particularly breathtaking is the beginning, where viewers “fly” over the bay with the city in the background.

Besides a bird eye’s view, one can choose certain points to “land” on and be amidst a specific location, like on a small boat – complete with a rower sitting on the back – cruising the bay amid huge European and Asian ships buoyed by Sunda Kelapa Port.

Or at a market by what is now the Fatahillah Square, with kiosks filled with fruits and vegetables and people of all ethnicities – Europeans, Javanese, Chinese – milling about.

All the time, the soothing, imaginary voice of cartographer Van Berckenrode is the journey’s guide, giving historical explanations as well as pointing to specific persons, locations or events.

Research for the VR show was done by Geerdink and historian Bea Brommer, who knows the city well through her frequent visits to Jakarta since the 1970s. Plenty of research went into making the project as accurate and detailed as possible.

About the market scene, for example, Brommer said: “We looked at tax documents from that time to have an idea of what was on sale in 1627, as all goods were taxed, including rice, bananas and durian. We also studied various original 17th-century drawings with market scenery and people of Batavia.”

THE UNIQUE COMMUNITY OF DEPOK

Another exhibition was on Depok, an area south of Jakarta, which has a unique history little known outside of its core community, but touched on many aspects of colonial life: from daily activities to slavery and all the way to the turbulent power change in the 1940s. It starts with VOC employee Cornelis Chastelein, who arrived and settled in Batavia in 1675. 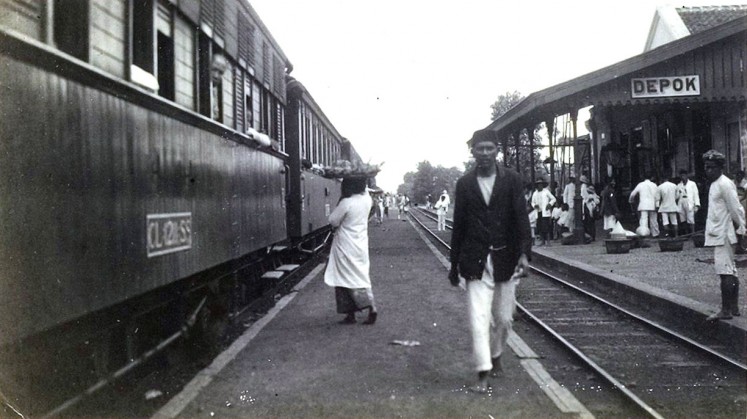 Black and white: People are seen at Depok station during the colonial years. (Courtesy of the Westfries Museum/Den Haag Archives )

He eventually acquired Depok, some 30 km south of Batavia. The land was fertile and Chastelein grew rice and vegetables there and even experimented with growing pepper and coffee.

When he died in 1714, he left his estate to his 150 slaves – an amalgamation of people from throughout the archipelago and beyond, as far away as India – on the condition that they enter the Christian faith.

The VOC, afraid of any kind of independent ownership or administration, allowed the former slaves to remain in Depok and utilize the land. Geerdink said: “Their interaction in the beginning was mostly with the local surrounding people, who helped in working the land”.

In 1850, however, Chastelein descendants from the Netherlands demanded the land back and started a lawsuit against the Depokers – and lost. Thus, the land officially became the property of the 12 extended families living there. “They were not Indonesian, not Indo, not Dutch: They were Depokers. This was unique in the colony,” Geerdink said.

After 1850, Depok became much more open to the outside world, and eventually many residents came to have the same legal status as the Europeans in the Dutch East Indies. Interestingly, they were not seen as Europeans by the Japanese occupiers between 1942 and 1945, and – unlike many Europeans during that period – were not sent to detention camps.

The tragedy, however, came right afterward, during the independence war of 1945-1949, when the Depokers, around 5,000 people, “were seen as collaborators of the Dutch,” said Geerdink.

In the book accompanying the exposition “Depok: The Dream of Cornelis Chastelein”, Willie Jonathans, a Depok native, recalls locals yelling Belanda Depok to them. The Depok community were often the target of rage from local mobs, and many then chose to leave for the Netherlands.

Arguably, the best part of the exposition were the numerous headshots by photographer Geert Snoeijer, showing some descendants – some living in the Netherlands, others still residing in Depok – of the 12 families. A number of descendants also came to the exhibition, like W.J. Leeluse, whose grandmother was killed in the 1940s. “This exhibition really got to me.”

Westfries plans to keep the Batavia Virtual Reality show, and while the Depok exposition ends in October, Geerdink hopes “it may be shown in Indonesia in the future”.

Not all reviews, however, were positive. In an opinion piece in the Volkskrant daily on the Batavia VR project, students Sander van der Horst and Sebald van der Waal spoke of “glorifying” the past and failing to “scrutinize the structural violence present in this former colony”.

“The message is clear: Colonial history is a tropical adventure, and her violent reality a digital fairy tale.” In the same daily, Geerdink replied: “Everything is discussed, just not in a judgemental way, but rather in a presentational way.” He pointed out that the voiceover explanation mentions “the brutal way that Jayakarta was destroyed in 1619, or the fate of the slaves, who made up half of Batavia’s population”.

Geerdink further pointed to the discussion the museum held in 2012 over the role of Coen, who was governor-general of the Dutch East Indies from 1627 to 1629. Many Hoorn residents questioned if the city should keep Coen’s statue. They saw this as too much of an honor for someone who ruled with an iron fist, including the notorious massacre in Banda over the nutmeg monopoly, which cost thousands of Bandanese lives. (ste)

A video has been viewed tens of thousands of times in multiple posts on Facebook and YouTube alongside a claim that a traffic light in Indonesia has been installed with video mapping technology. The claim is false; the clip does show an intersection in Indonesia but it has been edited to include special effects.

The Indonesian-language text superimposed on the video translates to English as: “Cool technology at a traffic light of Tanjung market in Jember…” 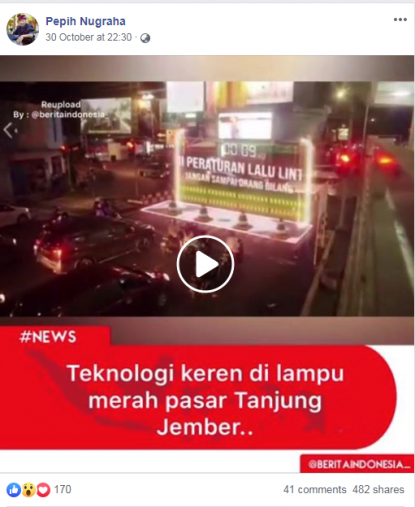 Jember is a regency in Indonesia’s East Java province.

A number of Facebook users appeared to believe the video showed a real-life event, commenting that it was “amazing” and “creative”.

The claim is false; the video has been edited to include special effects.

A keyword search on Google found this video published on Instagram on October 15, 2019.

The post's Indonesian-caption translates to English as: “Why is the song of the Depok mayor in Jember? By the way, don’t speed and always obey traffic rules everyone.”

Translated from Indonesian to English, the lyrics of the song read: “Be careful on the road, don’t be inconsiderate. When driving a vehicle, don’t speed. Don’t let people say you disrupt the traffic. Like a confused person who don’t know the rules.”

Here is the video of the full song uploaded on YouTube by the Depok Transportation Agency on July 22, 2018.

Depok is a city in West Java. Here is the official website of the Depok city government.

He told AFP by Instagram private message on November 1, 2019, that he recorded the original video, which he later edited and posted it on his Instagram account.

“The scene in the original video was taken at Tanjung market, " he said. "I recorded it at night at around 8pm. So, I recorded and edited the video myself."

AFP analysed the metadata of the video using online metadata viewer Get-Metadata and found it was taken on October 12, 2019, at 8pm local time using a Sony camera.

Below is a screenshot comparison of the edited video Ariyanto posted on Instagram (L) and the original unedited video he sent to AFP (R):

The scene of the video was taken at this intersection near Tanjung market in Jember. The intersection on Google Street View is embedded below:

Below is a screenshot comparison between the original unedited video (L) and the intersection near Tanjung market as seen on Google Street View (R). AFP has circled prominent features in red.